I haven't mentioned anything about my SCA household so far really. I'm a member of House Strangewayes. We're out of the East Kingdom and most of us live in the beautiful Shire of Quintavia (Central Massachusetts). We're a service household, we're constantly helping run events, gates, dayboards, feasts, retaining and creating things for our Kingdom.

I love my Household, we're a big dysfunctional family, we dress alike, we have our own vocabulary (F'nah), and we love stupid jokes and puns. (Exhibit A: the Sequin Rose Incident)

Which brings us to.... Sailor Moon. 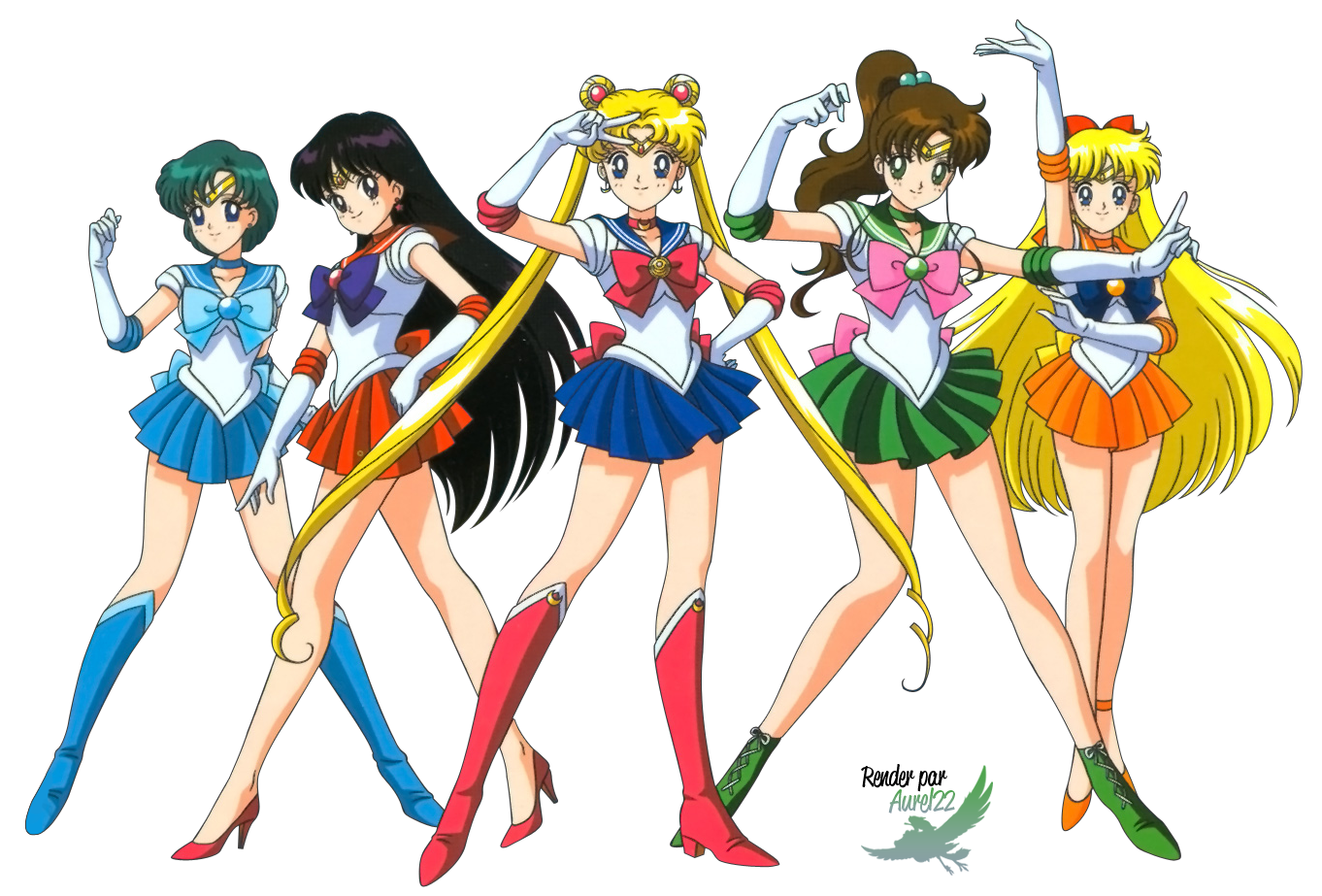 The Inner Senshi: Sailor Mercury, Sailor Mars, Sailor Moon, Sailor Jupiter and Sailor Venus
The Idea:
Yes. I did say SCA earlier. I know what you're thinking. Many of the household have otaku and cosplay roots and most of us have seen quite of bit of the series. It was hard to avoid as a nerdy girl of a certain age.
So when Elvira, who gets very sudden and very intense ideas, messaged the ladies of the Household in late December about a Sailor Senshi themed group costume challenge it was embraced immediately. Almost too quickly for a pack of late 20's, early 30's ladies who may have just finally grasped their chances to be magical girls and defeat the Negaverse.
The Design: 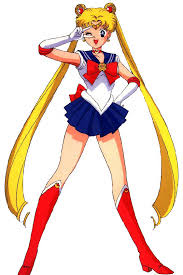 Sailor Moons Says: This is a ridiculous idea!
How to interpret this for a large group with vastly different levels of sewing prowess? Easy, 10th century Viking dresses. They are easy to construct, easy to embellish, and in the SCA we often do large felt applique on this style of dress.
The thing about Sailor Moon unlike other superheros is that they all dress in the same base outfit of Japanese school girl outfits/sailor suits with color variations. Each Senshi also has the astrological symbol, in some cases slightly modified, to represent their planet as well. At various points during the series, movies, manga et cetera they get powers or other representations.
So, I chose Sailor Moon, because I'm blonde and Sailor Venus was taken. (No one is bitter Elvira)
In my case, Sailor Moon is red and blue and has the gold crescent moon symbol.
The Plan: For the underdress I am planning on a white linen base, with a blue linen facing on the neckline for her sailor collar and two red guards on the cuffs to represent the red accent on her gloves. 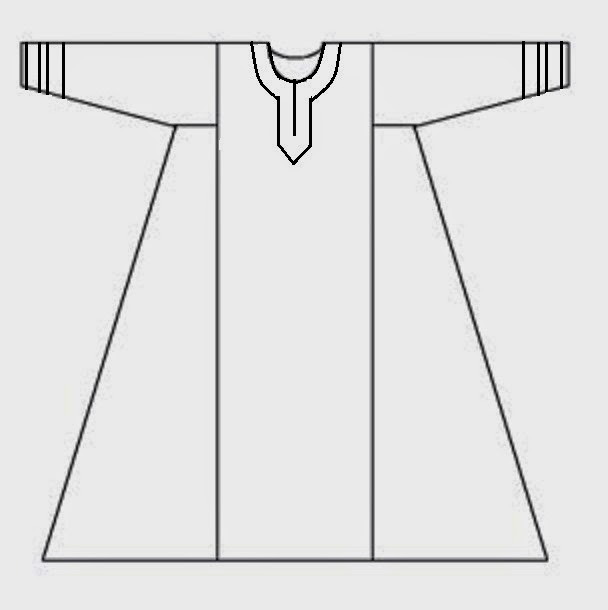 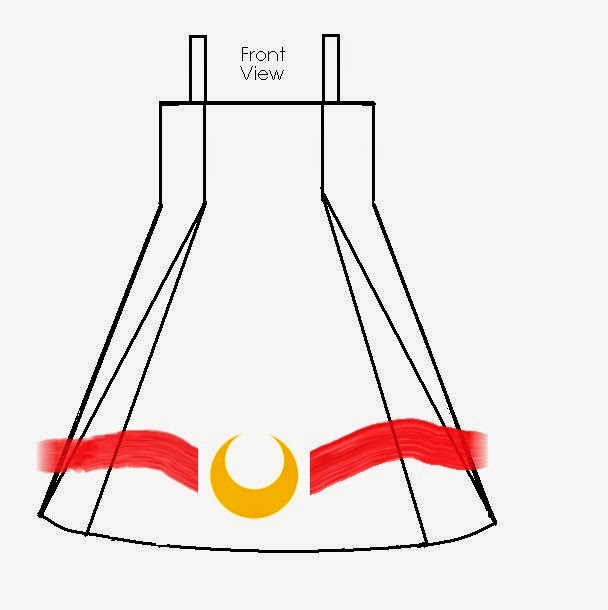 Apron Dress
The apron dress is cobalt blue linen with red and gold contrast stitching on the seam lines in interwoven herringbone stitch and will have a red ribbon of wool felt around the base and pale gold crescent moons on each of the three panels. (I don't want the moons too yellow, but we have a kingdom level award for service called the silver crescent and I also do not want to be mistaken for falsely advertising my accomplishments)
To top it off crescent moon pins and red beads to represent the front bow. I may also do a back bow appliqued on in wool felt to start the red ribbon that undulates around the hem, I haven't decided yet. I'm trying to walk to line of inspiration vs literal interpretation.
Supplies Needed:
Using the modified Vigdis underdress pattern from this post and the apron dress pattern from this post I cut out my fabric.
Then I realized something. My blue linen was thinner than the usual 58" wide that I use. Which led to adding a second gore at the front and a small gore at the top: 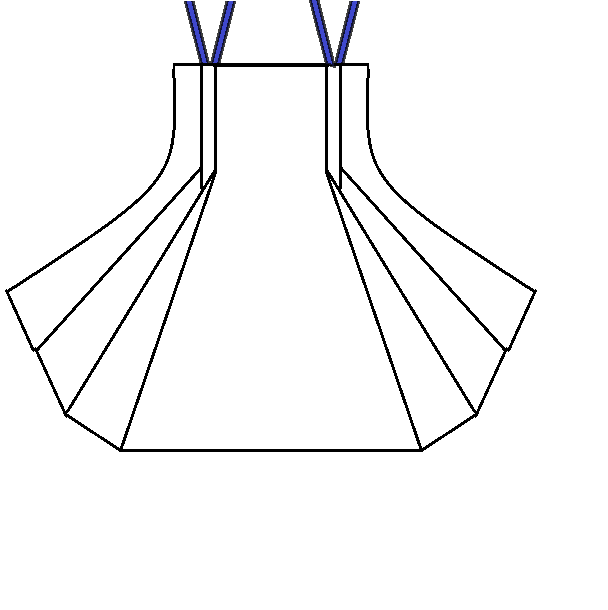 Pretty sneaky if I do say so myself.
Next time: Embellishing the outfit! 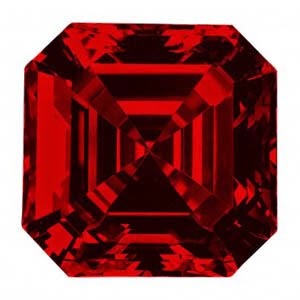