Welcome to the Smock-Down! A smocking tutorial

June is a beautiful time in the already picturesque East Kingdom, and one of my favorite June events is Palio di Stonemarche. This year marks my third year as head of Contrada Ferrari (Team Pretty Pony) and we are on a two year winning streak!

This year the head of rival Contrada Hippocampo is Kyria Anna Dokeianina Syrakousina and we're both a little clothes-mad, so my servicable black linen Italian Working Class dress needs a replacement. The smocked apron is an indulgence as the style is more German than Italian. Thankfully my contrada colors are the same as the House Strangewayes colors: black and gold. (We didn't pick them, I swear!)

I fell into some gloriously goldenrod linen/rayon blend at The Auburn Fabric Outlet and have come up with a design: 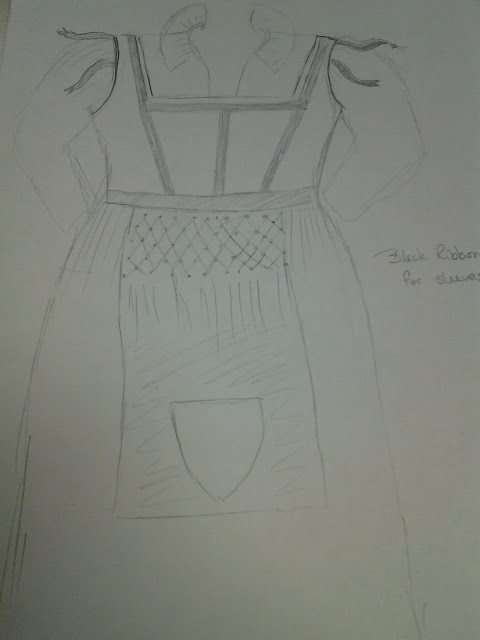 Based on the dresses seen illustrated by Campi in the 1580s

Now this post is about the apron, which I'll be smocking. I haven't smocked since I was about 10 in a February vacation sewing workshop held at Shirley's Sewing Center two doors down from the library where my mom worked, so I was fervently hoping smocking is like riding a bike and you never really forget.

Turns out it is, but it's probably because it's so easy. Tedious, but easy. If you can do a running stitch, you can smock.

Planning is important, because this is a fabric manipulation technique more than embroidery you need to allow for the fabric it eats up.

My piece started at 30 inches and ended up at 17 inches. So your starting fabric is 2 times the width of your finished piece. Other smocking techniques take up more fabric so you need to allow  to 3 times more fabric for them.

The first step is to lay out your dots. With this method you are marking on the right side of the fabric and will cover those dots with stitching, but still be very careful and make them small. As fun as making a huge amount of dots sounded, because I was using black and it's hard to mark on I made a grid of chalk. My intersections are every half inch.

﻿
Acrylic quilting rulers are your friend. Make sure you are doing an even number of lines, I wanted to make complete little diamonds in the rows and columns. If you are using more conventionally colored fabric you'll want to make tiny dots at the intersections.

My friend and fellow House Strangewayes member Syele found a tutorial that used plastic needlepoint canvas to help you lay out the grid. That works REALLY WELL. Use a sharpie and outline the squares which line up with your dots and then it's really quick to make the markings.

Now you get to put in basting stitches to gather the fabric. Starting at the right side of the grid, run a single line of thread across the grid picking up a small amount of fabric at the intersections. Be VERY sure your knot isn't going to pull out, and leave a tail on the other end of several inches.

You'll start to re-think your decadent life choices and how deep you've made your smocking grid. I ended up not doing the last few rows, I had initially planned on 8 inches deep of smocking (this is too much, doesn't look right to scale from period illustrations, see above) and instead did five inches.


So now that you've completed the basting lines you're going to pull them tight. You'll end up with a small block of shirred fabric.
﻿﻿
You are going to start the actual stitching on the smocking left to right. You are going to secure the tips of two of the shirred fabric pleats with two or three stitches, run the thread down the channel to the next diagonal intersection, secure two pleats together here, run the thread back up the channel to the next diagonal pair of pleats. Start each row with a long thread and hopefully you will make it all the way across, if not, secure on the wrong side and keep going.

Practice smocking on a small square first using colored thread, I found this really helped me see when I had missed a channel and accidentally nipped the outside fabric with the needle. This will go relatively quickly, and you'll see the rows grow.


Then you'll get impatient and want to see what the finished product looks like.

Once you have actually finished you then take out your basting stitches.

To finish off the appron I then left a "ruffle" along the top of about an inch and a half wide, hemmed the sides, again leaving about 3 inches on the sides, hemmed the bottom and attached the ties, which I had folded over and stitched to the edge of the hemmed fabric.

Picture of the finished outfit with the other two Contrada captains. Lord Frostholf for Contrada Sole, Lady Anna for Contrada Hippocampo and myself, for Contrada Ferrari.

I had to GOT TO make the Palio drappone, or banner which is awarded to the winning Contrada.

It's based off an illustration in a Roman book of hours of Archangel Michael defeating Satan. In this case satan is the spirit of un-sportsmanlike conduct. The armor is done in silver metallic resist as well as the top lettering is in gold resist.