Dear Princess Diaries,
I may be a princess, I may very much want to be a Disney Princess, but that Disney princess is most certainly not Ariel.
You see, I wanna be where the people are (warm).
I wanna see, wanna see dry land again.
Walkin' around on those... What do you call 'em? Oh. Pallets!
Sloshin' 'round in boots you don't get too far
Mud's too deep so we are jumpin', slidin'
Strollin' along down a (What's that word again?) river!
Mud where you walk
Mud where you run
Mud everywhere in this Kingdom of the Sun!
The water view's free
But wish I could be,
Back on dry land!
Soggy Love and Gilded Kisses,
Princess Fortune
P.S. Yes, His Highness and I (and most of our camp mates) are safe at a hotel.
Posted by Fortune St Keyne 1 comment:

Dear Princess Diary,
If wrapping myself up in linen straight out of the dryer is wrong, I don't want to be right.
In other news my trip for "just some felt" at the Auburn Fabric Outlet also yielded linen, tassels, and some very pretty frog closures.
And while it is less productive to be wrapped in a warm fluffy cocoon, it's just so irresistibly warm and fluffy!
Cozy warm love and gilded kisses,
Princess Fortune 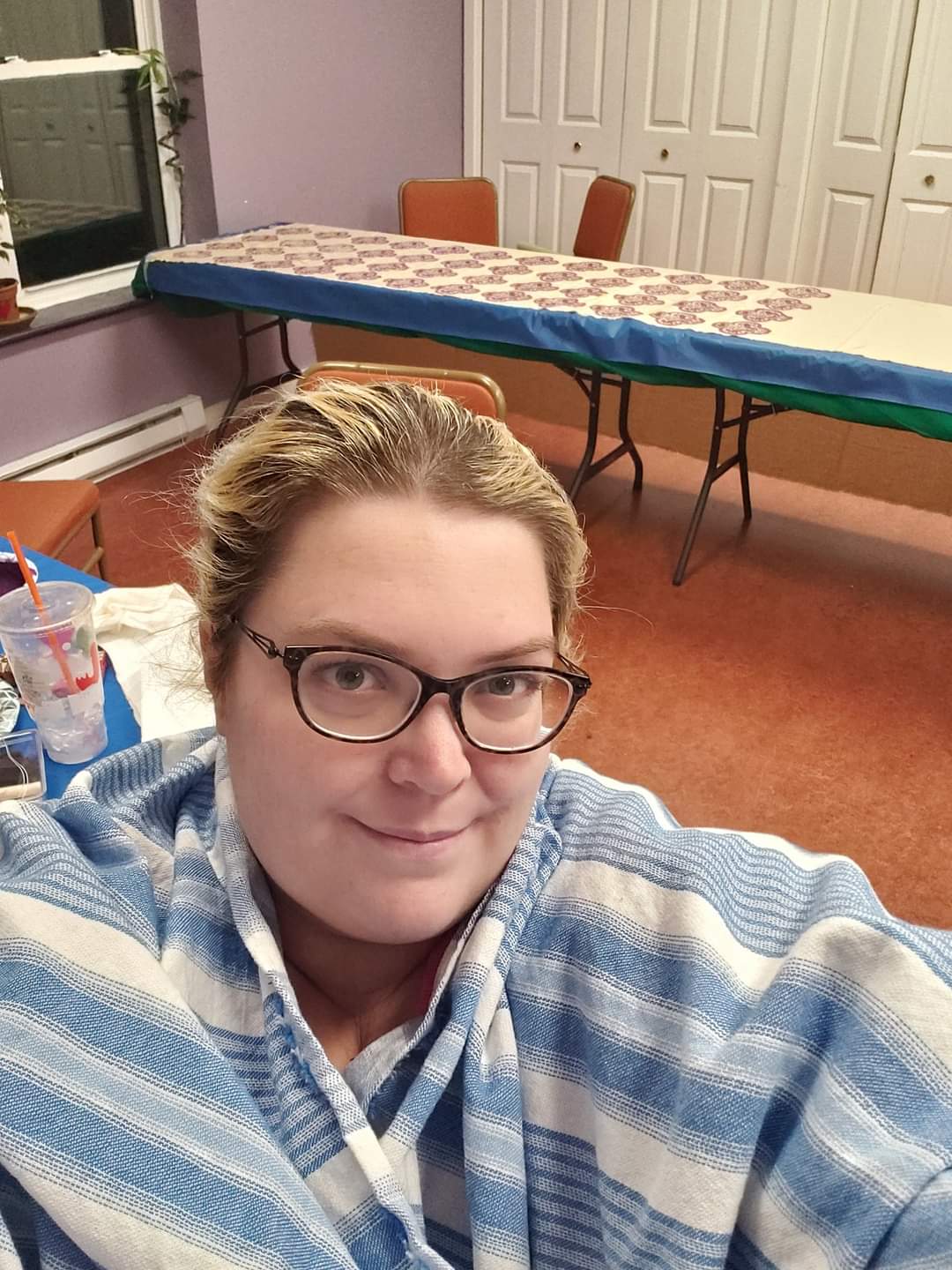 Dear Tyger Queen Diaries,
My champion, His Majesty Ôzurr, protects His Kingdom and the Tyger throne fiercely and through many weapons forms. He is a Tyger with claws, ready to defeat any foe foolish enough to cross his path.
He fights with rattan and with Rapier, he throws weapons with skill and panache, and recently he got his own bow and arrows. His Majesty excels at all martiall arts (and I'm sure it is the confidence he has in his archery skills that led him to select grass colored arrows) and at Harper's Retreat he and Our Chief of Staff Duchess Thyra carved out some time and went to shoot at the archery range.
I had become complacent, surrounded by my excellent Guard, the SCA family of my heart in Stonemarche, and especially with Himself to protect me. But our resolute King is never complacent. While on the Archery Range, surrounded by both Our champions of Archery and some of the best archers in the East and I will say, the Known World, he felt uneasy.
There was a threat that none of the others were concerned about. None of the other archers that day sensed the malice lurking in the nearby woods, none but mighty King Ôzurr that is. He carefully lulled his enemy into a false sense of security through a few shots at the target and then, with one masterful pull on his bow, felled the malevolent presence with a precise shot directly at its heart!
Thus the seemingly dead branch was pierced and the strength of his royal arrow snapped it right off the tree and the carcass lay upon the field for all to witness.
This picture shows the joy and relief from Her Grace Thyra that His Majesty vanquished the evil stick and it could not threaten the Populace any more.
We are so lucky to have such a stalwart and watchful King, whose keen senses and aptitude in weapons forms keeps us safe from all threats.
I, for one, rest easy knowing Ôzurr the Boot Giver, storm born King of the East protects these lands and Our people.
With Love and Gilded Kisses,
Queen Fortune 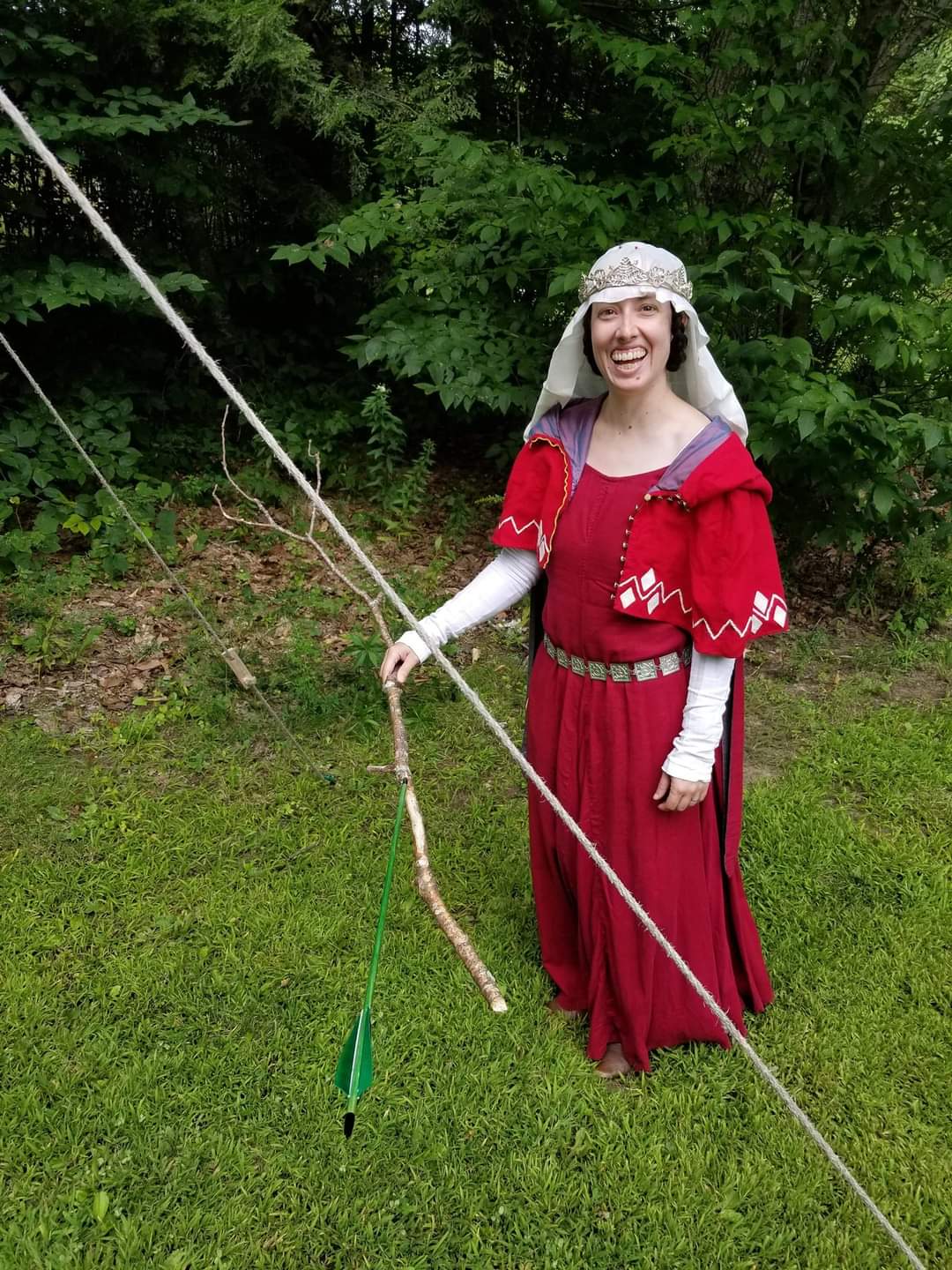 Dear Tyger Queen Diaries,
Dispatch #6 from War.
This is my army.
There are none like it.
And this one is mine.
And I love each and every one of them. 💛💛💛.
The reserve tank is low. The emotions are high. And yet... Seeing the faces of my warriors preparing for the Bridge Battle replenished me. With joy and determination in their eyes they took the field.
Thank you, my beautiful killers. Thank you.
Love and Gilded Kisses,
Queen Fortune

Dear Tyger Queen Diaries,
Dispatch #5 from War.
Today I took a walk into the Woods with Kenric.
Her Grace Avelina handed me Kenric's Champion Tabard at Archery Champs this morning.
Intact with the good juju, and now one or two of my tears I took it into the Far Side of the Woods with me.
But that was not enough. That is not where he would have been. So Jarl Ivan took it where I could not go.
And my Tygers and Our Allies fought so fiercely. With such love. And returned to me time and time again covered in Dragon's Blood.
I am so proud of my warriors. So very proud. 💛
Stripes Proudly Showing and Claws Out,
Queen Fortune
Posted by Fortune St Keyne No comments:

Dear Tyger Queen Diaries,
Dispatch from War #4
Tonight we reminded the Known World that the E in East is for EXTRA.
We attended the State Dinner in MidRealm Royal tonight. His Majesty Edmund of the Mid and Ôzurr had agreed to wear each other's colors. So He and Her Majesty Kateryn wore purple and gold and we wore red. Thankfully Mistress Sofia had just completed a GORGEOUS slashed silk doublet for Ôzurr and I had made a burgundy velvet dress to match with embroidered 2 part sleeves from Leonete and Thyra. (A huge thank you to Bianca, Daniela, and Margreta for helping me get dressed) We even got to wear the portrait pendants Lord Alexandre
gave us at GNEW.
And while the other royalty walked or took Royal golf carts, His Majesty Ôzurr and I rolled up in my beloved gondola.
We were fashionably late and let me tell you - it was an entrance. 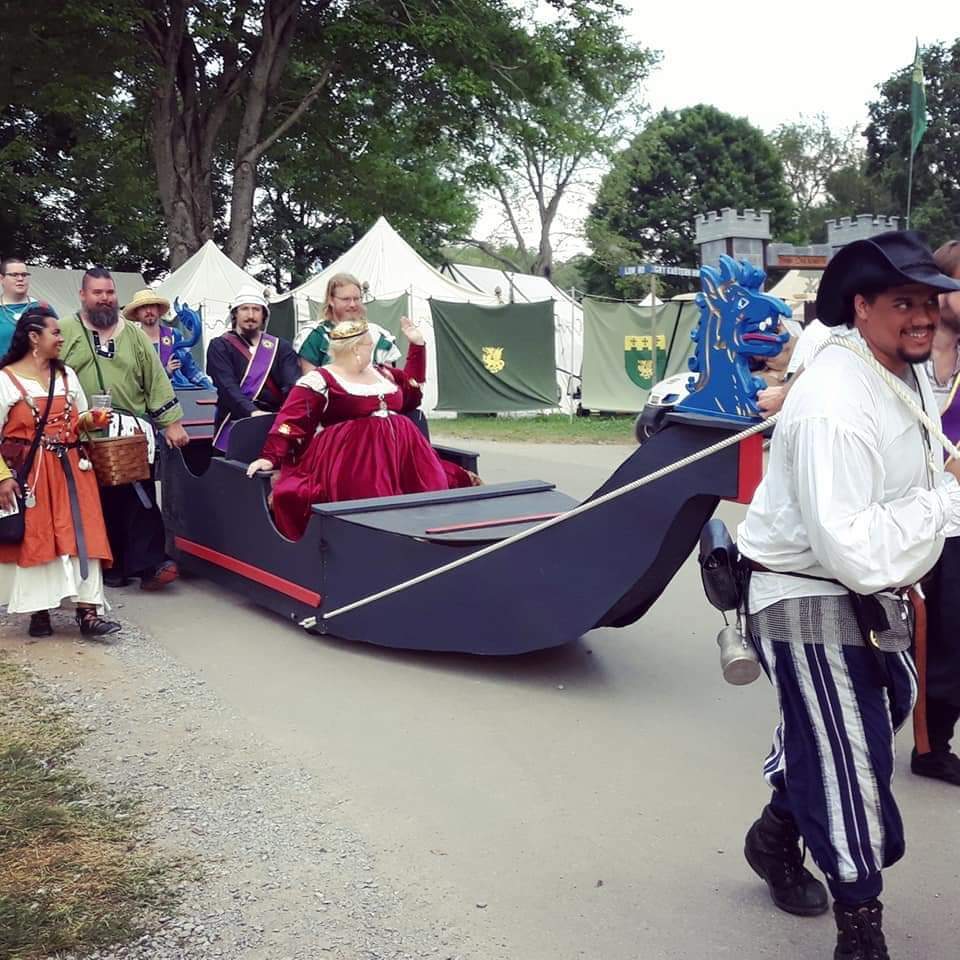 His Majesty was not convinced the downhill portion of Our trek was going to work well, but I had faith in my Guard. My Guard who, I would like to mention, started playing O Fortuna as soon as we got started moving. As we passed the playground We even acquired a kazoo chorus accompaniment from the playground.
I'm pretty sure I laughed the entire ride.
Our Royal Cousins were, it's safe to say, surprised.
Thank you to Goerijs and the East Kingdom Stagecrafters Guild for making my gondola, La Serenissima, a reality. We have surely won the Style War Point.
Love and Gilded Kisses (from my gondola),
Queen Fortune
(Photo by Baroness Bianca Angussola)
Posted by Fortune St Keyne No comments:

Dear Tyger Queen Diaries,
Dispatch #3 from War.
Today I followed my King into War.
His Majesty stood alongside Our dear friends and in front of Our Foes and Allies We broke the war arrow, and then loudly and clearly blew the war horn across the Battlefield signaling the start of Pennsic.
Earlier that afternoon We had sat in Mid Royal with Our Warlord, Our Generals, and Our stalwart Allies as Ozurr and Edmund discussed the kind of War They envisioned: one truly between eternal friends.
We have experienced Pennsic between Crowns that have true animosity and have watched the strife seep into every aspect of the event, poisoning the experience for everyone.
We did not want that.
Their Majesties Edmund & Kateryn did not want that.
And so the two Kings have worked very hard to create a War littered with F bombs. In this case F is for Fun. (In case you could not tell from the "Hippies" who protested Opening Ceremonies)
And despite winning the first battle: an impromptu dance off at the foot of the Battlefield - thanks to the wonderful drummers of La Familia Gladiatoria who brought the energy and the magic again this year - tomorrow We truly go to War.
But I hold right now in my heart the sight of my beloved Populace and Our Allies filling the East Kingdom courtyard. I walked out from behind the thrones and saw a sea of people. All of them smiling, laughing, and gathered to show the might of the East. I just stood for a moment, drinking in the sight of so many people I love in one place, for Us. I sometimes still cannot believe that We are lucky enough to get to lead the fiercest, most talented Populace in the Known World.
No matter your stripes my Tygers, you make me proud. Now let's go win a war together! 💛
Love and Gilded Kisses,
Queen Fortune
Posted by Fortune St Keyne No comments: