And Now for Something Completely Different: a Sonnet for a Scroll

Some of the best courtesans in the Italian Renaissance were poets. Tulia d'Argona and Veronica Franco for instance.

And while I've dabbled at the Ottava Rima I am not known as a poet. I like to think I'm good with words though, and when Honig asked me to write words on a Maunche (kingdom level arts and sciences award for the East) scroll she was illuminating for Lady Olivia Baker.

Olivia and I started around the same time in the SCA and we would see each other across events, her in something ridiculously elaborate and Elizabethan, and myself in something ridiculously elaborate and Italian and we'd give each other the head nod of "the fancy person in my soul recognizes the fancy person in your soul" and go on our way.  But it was always inspiring to see her so for the first scroll I would be composing I wanted it to be special.

I took a week and a lot of rhyming dictionary time and composed this sonnet:

That every tongue says beauty should look so.

Out of the ancient's painting she hath stepped.

With needle, thread, how fabrics are beguiled,

And thus the painted banquet she hath styled;

Not from the stars do we such judgment pluck;

Her passion fierce: our Eastern lands are blest.

Her toiled research bears these fruits, not luck.

The lady's proud livery, so gazed on now.

And so do we, Tsar Ivan and Tsaritsa Matilde, induct our subject Olivia Baker into the Order of the Maunche on this feast day of St. Scholastica, February 10, A.S. 52 at our King’s and Queen’s Arts and Sciences and Bardic Champions in the Crown Province of Ostgardr. 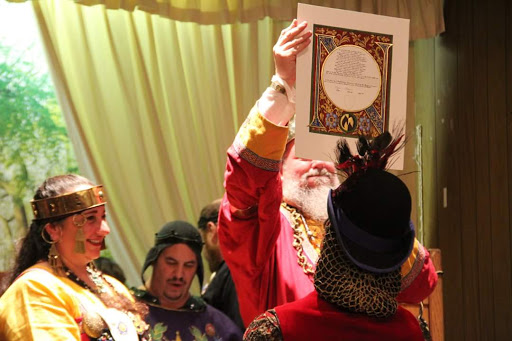 She loved it, which is the most important part.  And Rowen, Baron of Bhakail and longtime kingdom herald told me I did a great job.  Which really meant something to me. I borrowed heavily from Shakespeare himself and his sonnets. See below for phrases I stole or modified to work:

“Awakes my heart to heart's and eye's delight.”

“That every tongue says beauty should look so.”

“And to the painted banquet bids my heart;”

“Not from the stars do I my judgment pluck;

And yet methinks I have astronomy,

But not to tell of good or evil luck,”

Blest and behest are rhymed in Cymbeline

“His radiant root. Away! and, to be blest,

Let us with care perform his great behest.”

“Thy youth's proud livery, so gazed on now,”