This is the handout for my most recent version of this class taught at Pennsic 46.

I had never taught before at Pennsic and was very nervous. Then I kept watching people show up for my class... and got even more nervous. Laurel wreaths.... terrifying laurel wreaths were adorning (turned out to be LOVELY) people attending MY CLASS.

It was a packed house and both sessions I taught this had at least one male in the room (you go guys!). I've had some discussions on drawers with people both in class and out and will be updating and further researching as well.

And yes, Lady Urtatim, I took out the word Turkish.

How precisely this developed is unknown, but courtesans were known for adopting Islamic styles and men’s-styles. For example, one extant pair housed at the Prado are patterned after men’s style breeches, embroidered with mottos such as “voglio il core” or “I want the heart”, but unlike the example seen above do not have slashes.

Drawers, also called calze or brache, quickly caught on for the more respectable ladies. In Mode a Firenze it is mentioned that Eleanor of Toledo (1522 –1562) possessed a pair of drawers in red silk taffeta, and Maria de' Medici (1573 –1642) had many pairs were made up in splendid gold brocade as the new Queen of France (1610). Englishman Fynes Moryson observed in his travels in Europe (May 1591 to May 1595) that “city” virgins and gentlewomen of many places wear silk and linen “breeches” under their skirts, published in his Itinerary (1617). By 1625 according to Mary Laven's Virgins of Venice nuns were wearing drawers.

Since the origins are murky I’ve looked into what very bare evidence of Ottoman and other Near/Middle Eastern undergarments for women were. The pants worn under clothing have many names: Shalwar, salwar, or Sarwal/Serouel all are similar in cut and seem to have evolved into drawers, as evidenced by the wide stance. Often these were of thin fabric for women and white, but no slit that we know of. These are believed to have been linen or cotton and are depicted as being very light or sheer.

The extant examples included here are from the early 1600s, so we can only speculate on earlier uses of these garments. However, if study of period costume has taught me one thing: our ancestors were far cleverer than we give them credit for.

A note on the above illustration: I believe is happening in the above woodcut is more titillation than actual underwear. The cortigiana di lume, the lamppost courtesans or streetwalkers, were known to wear men’s clothing to arouse interest in clients. Girls wearing men’s clothing has long been sexy. Vecellio even speaks of courtesans wearing “men’s style” breeches under their skirts.

It could also be a bit of a commentary on the courtesan’s rights in society, being more on par with a man, “wearing the pants” literally. There is a woodcut of a german woman wearing braes with a message about the woman ruling the husband. So we’re going to base the patterns used here on the few extant examples.

A Short Note on Men’s Underwear:

The Met extant drawers are described as being for men, but the period male “brache” or “mutande” have a different stance, and seem to be constructed with a full strip of fabric between the legs instead of a gusset. They also appear in depictions as shorter, closer to modern boxer shorts. You can see an example of men running in their underwear in the Triumph of April fresco in the Salon dei Mesi of the Palazzo Schifanoia in Ferrara from the mid-1400s. The women in that fresco are wearing only chemises to run, and are thought to be prostitutes, you can see right up one of their skirts. (Nice banquet hall, Cardinal).

·         Gathered into a thin waistband with a tie through eyelets, descriptions of Spanish drawers list the ties and agelets separately

·         Embroidery is both monochrome and polychrome

·         Slit goes from the front, about half way around on the two Met examples, the Prado example has a smaller slit.

I am not fully convinced that extant example #3 here was ever fully sewn up the center. You’ll notice it is not fully sewn all the way up in the front or back. I suspect these were independent tubes held together on a single drawstring waistband. This is the method I use to make mine, and it works really well for me.

Now, let’s talk about why you should wear them: because most people have thighs that touch. Drawers, especially split drawers, are a more porta-privvy friendly option to bike shorts and they can be made of natural fibers.

Personally, I have one pair for every day of an event. Since, you know, they are underwear! 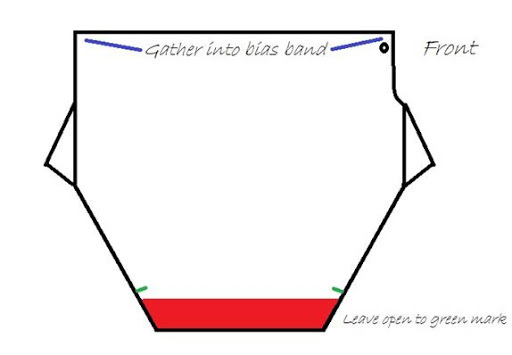 Janet Arnold has a pattern for drawers in Patterns of Fashion 3 based on one of the below examples from the Met.

Depending on how familiar you are with pattern making, you’ll notice this looks a lot like a modern pants pattern, but instead of being cut in its entirety, the flares of the crotch seam are added with gussets. It is very important if you are using the period drawers layout to do flat felled seams so there is a smoother surface on your inner thigh. I promise you.

Take your waist measurement and multiply it 1 ½ times. Divide this number by 4. This is measurement 1 on the diagram.

Take a measurement around leg just below the knee, add 2 inches, divide by 2, this is measurement 2 on the diagram. If binding your cuffs multiply the measurement 1 ½ times and then divide by 2. 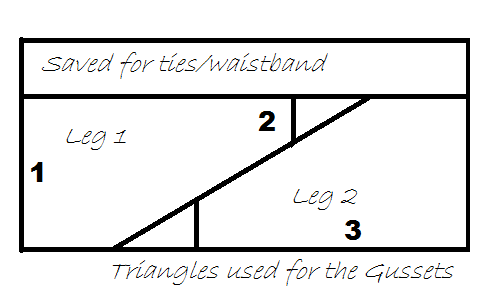 Take a measurement from your waist to just below your knee, add 1 inch for gathered and bound waist, 3 inches for a drawstring, this is measurement 3.

The gussets are from what is left, generally around 8 or so inches. You will need four triangles about 4 by 4 by 6 inches, or you can make two 4 inch squares. If you are sewing by hand, it won’t matter, if you are doing it by machine, then do the triangles.

If you are doing a gathered and bias bound waistband cut out a strip three inches wide by your waist plus 1 inch. Iron in half, then fold up the raw edges to the ironed fold and iron those in. Iron the raw edges in half an inch and set aside. If you are binding your bottom cuffs do the same but using your below the knee measurement and adding 25 inches for ties each leg.

Sew your legs together on the long side using a flat-felled seam. Again, you want your seams as flat as possible.

Curve one side (mirroring on each leg) of the leg piece in slightly, about an inch and a half, and then attach the gussets to either side of the leg piece as shown in the first Period Pattern diagram.

Sew the legs together from the tip of the gusset to the end, or 3 inches before the bottom cuff if you are binding the cuffs. Again, flat-felling the seams, and if you’re really fancy, to the right side.

TURN ONLY ONE LEG INSIDE OUT. Nest the two legs together and sew from the BACK to the far side of the gusset. Leave the rest open. Hem the front opening.

Gather the waistband and fold over if doing a drawstring or bind in the waist binding you made earlier. If you are doing a waist bound top, you will need to make two eyelets on either side about an inch and a half down from the top and an inch and a half in slit. You will pass a silk ribbon or some finger-loop braid through here as your tie.

Congratulations on your new set of drawers, I hope they bring you light, happiness, and no thigh chafing!

Now, for those of you more afraid of pattern drafting and are willing to cut corners, read on for my quick method drawers:

How I Do It Quickly– (aka Pennsic is in a week and a half, let’s not kid ourselves here)

Yardage: I usually purchase 3 yards of fabric, but I am a bigger girl, am tall and a lot of that height is leg. I use the leftover to make a simple fabric pouch to tuck the dirty pair in once worn and toss that pouch into my garb bin.

Cutout the pattern at least one size larger than you would normally wear, you wanta little room, but these aren’t harem pants, don’t go crazy.
Measurefrom your waist to about your knees, or a few inches longer, add 2 inches tothis measurement and fold up the pants pattern at this measurement (measuringon the pattern from the markings for the waistband.

Ignorethe layout on how to cut them out on fabric. Be a rebel!

Lineup the inner thigh portion with the fold, this is important. You don’t want aseam here, it’s not a terrible thing, but it will improve the experience. Add acouple inches to the top (dashed lines), this is for adjustment later.
Cutout the two legs, You’ll have two pieces with a U shape in the middle. Finishthe U shape first, either with a strip of bias tape or by folding over thecenter.
Seweach leg to itself along the long side. You’ll end up with two tubes.
Now,the goofy step! You’re going to put them on without the waistband.

Cuta strip of elastic so it’s comfortable for your waist. I recommend non-rollelastic. Put on your two leg tubes, put the elastic around your waist over thetubes and safety pin, and adjust at will! You will likely end up with moreexcess at the front than the back. Go through the rhythms of daily life, walk,sit, squat, make sure it doesn’t pull overmuch. Leave the crotch loose, nottight up against the body, but not to your knees, both situations will leaveyou uncomfortable.
Oncethe waist is adjusted, mark with chalk and cut off the excess. Leave 3 inchesor so to fold over to create a casing to house the elastic, this depends on thewidth of your elastic, I usually use 1-1 ½ inch wide. I always recommend usingelastic as a backup for drawstring pants. No one needs the drawstring to failsay, when running to court.

Thereare two ways you can do this next step, you can either have each leg be independent on the elastic waistband–or– stitch together the first 4 inches at the center front and at the center back, do a tight zigzag at thesplit to reinforce this spot. Add two button holes or thread eyelets to runyour drawstring through.
Doublecheck the bottom measurement and adjust and finish the cuffs. Add thedrawstring and elastic Add bobbin lace for fun. Embroider the cuffs. Writecheeky sayings!

And if you really want to go crazy –
A pattern forsalwar from Master Rashid of the East:
Extant Drawers (also calledCalze or Brache) –

·        Thispair is marked as being "possibly for a man"
·        Linendrawers embroidered with polychrome and metal threads, some of which aremissing, showing the original ink used to mark the pattern
·        Polychromebobbin lace at the bottom of the leg opening
·        Drawstringwaist, missing the cord